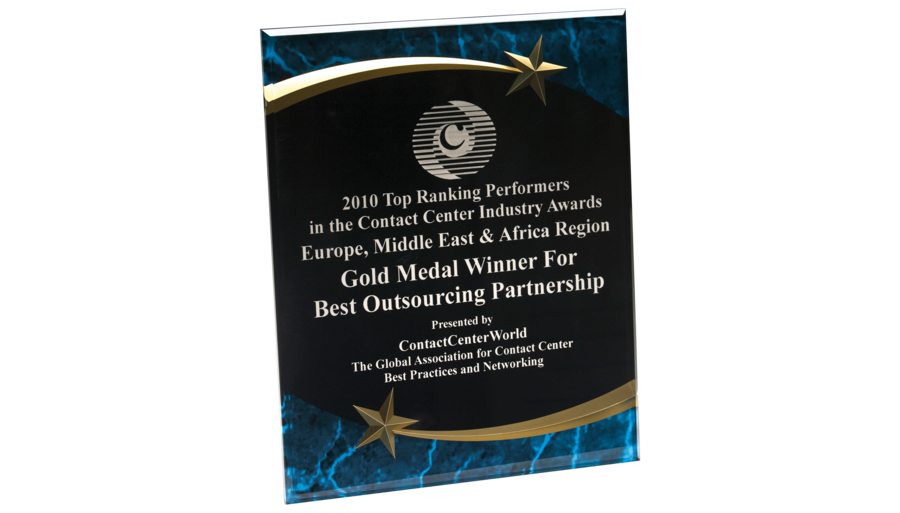 The award in the category “Best Outsourcing Partnership” is presented to clients and call center partners that are engaged in anoutstandingly successful professional relationship that is effective for both parties. CCC won the gold medal in this category for its successful partnership with Ryanair – Europe’s first and largest low-fare airline. The service is provided at the locations in Bucharest and Bratislava.

Together with Paul Cunnane, training instructor at Ryanair, Simon D. Pearton-Hindley, project manager at CCC Bratislava, introduced this successful partnership and won over the audience with his professional presentation:

“Since November 2008, our highly qualified service professionals at CCC Bucharest and CCC Bratislavahave been providing first class services to the customers of Europe’s biggest low fare Airline Ryanair. I would like to thank our partner Ryanair for their trust and the successful cooperation over the past two years, which allowed us to achieve this prestigious award at the Contact Center World Awards. It’s a major success – both for CCC and for Ryanair. Congratulations to our partner and also a big thank-you to Paul Cunnane!”

The second CCC award in gold goes to Dana Waschk, HR manager for the entire CCC Group, as “Best Support Professional Human Resources”. This award is presented to persons that provide existing and potential employees at CCC with outstanding HR support.

“It was a great honour for me to be able to present our far-reaching solutions with regard to selection, training and development of employees in London to the top players in our industry from the entire EMEA region. I am very happy for my team that they received the gold award and won in direct comparison with other outsourcers and inhouse call centers. It serves as confirmation that we are taking the right route, namely placing people, the most important factor in the call center business, at the centre of our activities”, said the award-winning HR manager about her success.

Dana Waschk has been working for Competence Call Center since 2004. She is currently responsible for anHR team of 20 and the development and promotion of more than 2500 employees at eight locations, as well as for international recruiting.

Cristina Georgescu, call center manager at CCC Bucharest was the happy winner of the bronze medal for the Romanian CCC location as a finalist in the category “Best Contact Center”. CCC Bucharest opened in June 2007 as what was then the seventh CCC location. Today, it has 200 jobs and 240 employees. At the beginning of the year, the Romanian office was extended and is now twice its original size. The category “Best Contact Center” distinguishes contact centers with a strong focus on their relationship with their employees and partners and who ensure that their performance is always in line with organisational goals.

The regional gold medal winners of the EMEA region, Dana Waschk and Simon D. Pearton-Hindley, will compete for world victory at the World Finals in November in Las Vegas. Two times in the past, CCC has taken home the sought-after trophy at the Contact Center World Awards in London and at the world finals in Las Vegas, where CCC convinced the jury with its professional presentations. In 2006, CCC manager Carita Vallinkoski was awarded “Best Contact Center Leader” in EMEA and worldwide. Last year, IT manager Gregor Willenberg, who also convinced the jury in Europe and in the US, took home the same awards in the category “Best IT Support Professional”.

A total of 28 international awards testify to the high quality standards of the CCC services and the excellent competence of the professionals at CCC.